Map of Woodlands around Ireland

The Catalogue Of Woodlands

Below here, I am developing a catalogue of woodlands
featured through the map link above.
Please browse these and decide which woodlands
you would like to share a Sunday Afternoon in
with a friend or others, or there may be
a gathering happening in your chosen woodland.

click here to see if Bards In The Woods are gathering where you are.

Ballykeeran, north west of Letterkenny just before Kilmacrenan on N56

Drumboe, between Stranolar and Ballybofey

Clonbur, by Clonbur village on R345 on southern shore of Lough Mask

Newvillage, 2kms north west of Oughterard along the Glann road

Castlemorris, off of N10 between Kilkenny and Waterford at Aghaviller
broadleaved and conifer woodland, heritage (round tower), picnic areas, pheasant hatchery

Monicknew, 11.5 km south of Clonaslee on road to Mountrath

Brittas, by Clonaslee, north west of Mountmellick, below Slieve Bloom

Capponellan, 1.5 km south west of Durrow on the N8

Dunmore, south of Abbeyleix and north east of Durrow

Glenbarrow, take R422 west of Mountmellick and look for signs on left

The Cut, Glendine, on mountain road between Mountrath and Clonaslee

Ravensdale, 8 km north of Dundalk, just off of N1

Popular posts from this blog

Do The Trees Call You? 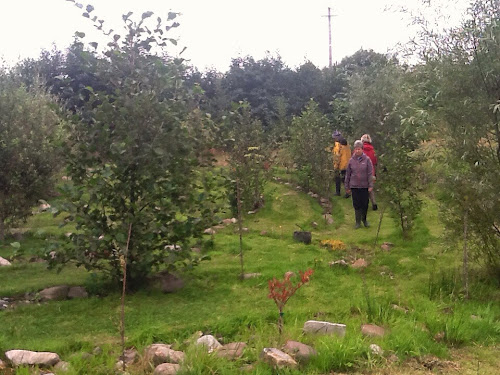 I have a Living Tree Labyrinth and many people who visit to walk this discover that their personal 'intuition' volume increases.


Perhaps you discover this too in your chosen spaces?


Our senses were strong and magical when we were children, and then they faded through the demands of education and career. As we mature we seem to discover these 'sacred' senses becoming stronger again, more amplified, and even become a 'Calling'. Do you agree?


As I talk about this I am not thinking about about New Age style “manifestation” rituals, wonders and experiences. I personally feel most of the New Age industry is really dressed up narcissism using techniques posing as spirituality to lure others, wind them in, and extract from them.

You'll know the ones, the folks who use a dynamic language of spirituality to charm their superiority over others and, of course, intimidate other people into feeling that they are lesser, incomplete, and even sinful beings.


Many people who…
Read more